In 1908, a small group of Byzantine Catholics began plans for the organization of a parish in Gary, IN. A tract of land was purchased on 13th Avenue between Madison and Monroe Streets for the future church. Liturgical Services were celebrated in Binzen Hall, Jefferson School, and Holy Angels Catholic Church. In 1911, the parish was organized and the first St. Michael's Church, a wooden structure, was built facing Madison Street. A rectory was built shortly thereafter for the priests serving the parish. In 1920, a second church, a brick building and presently standing, was built at 13th Avenue and Madison Street.

In 1948, a house was bought at 422 West 12th Avenue to house the Sisters of St. Basil the Great, who were the teaching faculty at St. Michael's Byzantine Catholic School, which opened its doors on September 7, 1950. In 1956 - 1957, a school auditorium was constructed and dedicated next to the church.

In July 1960, twenty acres of land were purchased at 57th Avenue and Madison Street in Merrillville, IN. In 1969 - 1970, the social center and school were constructed and dedicated with the Sisters of St. Basil teaching and assisted by lay persons from the parish. At this time, a home at 600 West 58th Avenue was purchased for use as a rectory. In October 1973, a home was purchased at 5795 Jackson Street for the Sisters as a convent. In December 1973, the church and auditorium at 13th and Madison in Gary were sold and a move to 57th and Madison in Merrillville was completed. In June 1981, St. Michael's School closed because of a drop enrollment and a shortage of religious teaching Sisters.

In 1984 - 1985, the new church and rectory were constructed with the opening Divine Liturgy and blessing of the church taking place on March 20, 1985. Following the construction of the new church, a large utility building and picnic pavilion were built on the parish property. 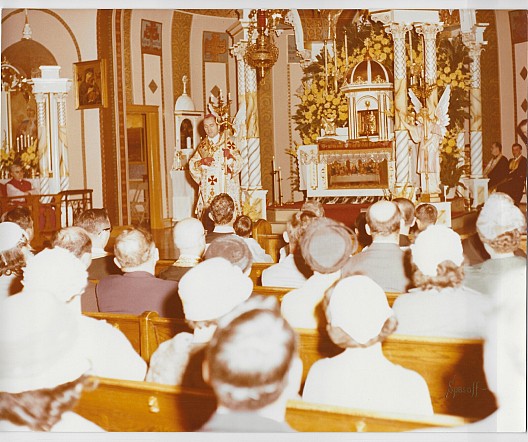 Priests in our parish